The Horace Orr Post 29 of the American Legion in Marietta presented $90,000 in donations on Thursday evening Aug. 2, 2018 to three veterans’ charities from the proceeds of the 4th Annual Veterans Memorial 5K and Military Appreciation Celebration that was held on May 26, 2018 on the Marietta Square. These awards were presented prior to Post 29’s general meeting and included an awesome dinner to a packed house of members, sponsors, friends and supporters. It was a great night!

$30,000.00 was presented to each of the designated charities that included the Georgia National Guard Family Support Foundation, Clay National Guard Center; the Shepherds Men-Shared Initiative of the Shepherd Center; and the Service Office of the American Legion Post 29. In the four short years since its inception, the Horace Orr 29 Post of the American Legion has donated almost $250,000 to various veterans’ charities in the metro Atlanta area. Plans are already underway for the 5th Annual event on 25 May, 2019!

The Veterans Memorial 5K and Military Appreciation Ceremony is organized each year by the Horace Orr Post 29 of the American Legion to honor the four pillars of the Legion: Americanism; veterans affairs and rehabilitation; national security; and children and youth.

Special thanks to the citizens of Marietta and Cobb County, the participants in this event, sponsors, volunteers and the entire Horace Orr Post 29 American Legion Family for their time, support and resources in making this event successful as we continue to support our military veterans. 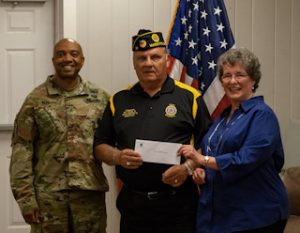