The GA National Guard Foundation and Vinings Bank co-hosted the ‘Meet the Leadership of the Georgia National Guard’ at The Atrium at Vinings on July 23, 2019.  Mr Dan Oliver, President of Vinings Bank, introduced  MG Tom Carden, The Adjutant General of the GA National Guard.  MG Carden spoke about the business of the GA National Guard and introduced BG Randall Simmons, Brig Gen Tom Grabowski, BG Tom Blackstock and Mr Joe Ferrero, Deputy ATAG, as each provided information to community leaders and supporters.  Members of the Air and Army National Guard Recruiting Teams attended as well as the representatives from the Youth Challenge Academy, the Work for Warriors  Employment Program, and of course, the GA National Guard Foundation.  It was a great night for the Guard and on behalf of the Foundation, we want to express our appreciation to Dan Oliver, Leslie Hammond and the Vinings Bank Team for organizing such a wonderful evening at an awesome venue.  Also, a special shout-out of thanks to Nancy Couch, organizer extraordinaire, Andrea Ruef and David Golden, who volunteer to serve as Public Directors on the Foundation’s Board! 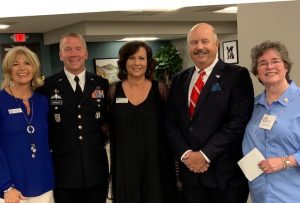