You are here: Home / News / Donations in Memory of Harold Carlisle, BG, Retired 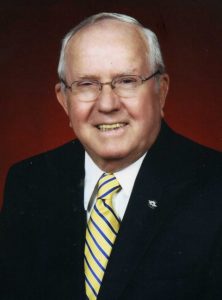 Harold Wesley Carlisle, 87, went home to his Lord and Savior on Sunday, April 8 after a brief illness. Born in Macon on December 11, 1930, he was the son of the late Alex O. and Ruby Thompson Carlisle. Growing up, he was trained in auto repair in his father’s shop and he and his brother continued the legacy of their father to run an honest business at Carlisle Garage and Holmes Auto Parts on Vineville Avenue in Macon. He was a 1948 graduate of Lanier High School and the US Army Infantry School, Armor School Command and General Staff College and Industrial College of the Armed Forces.

While still in high school, Harold joined the Georgia Army National Guard at age 16 and rose in rank to retire after proudly serving 35 years, 11 months and 3 days. During his service, he was an instructor at Officer’s Training School, the commander of the 108th Armored Division Tank Battalion of the 48th Brigade, and the Inspector General and retired as State Brigadier General. He made many life-long friends during his years of service and loved every minute of being a soldier. He was co-founder and emeritus trustee of the Georgia Guard Insurance Trust, Past President of the National Guard Association of Georgia and co-founder of the Georgia Guard Credit Union. Among many awards, he received the Georgia Commendation Medal, the Meritorious Service Award and the prestigious Legion de Lafayette de la Guarde Nationale award. He served many years as the President of the Macon Volunteers Trust, a fund established to assist National Guard Units in their mission. He also served as President of the 121st Infantry Association.

A 32nd degree Scottish Rite Mason, Harold was Past Master of Marshal A. Weir Masonic Lodge, Past Potentate of Al Sihah Shrine Temple, a member of the International Cabiri and the Royal Order of Jesters. As a Shriner, he was a member of the Clown Unit and enjoyed entertaining children with his humor and little antique car he rode in parades.

Harold served three terms as Monroe County Commissioner, the last term as the Chairman. He loved the county and was dedicated to serving the citizens to the best of his ability. Having been appointed by the Governor, he proudly served on several Georgia State Boards including the Georgia Agricultural Exposition Authority, the Georgia Environmental Facilities Authority, the Georgia Development Authority, and the Community Affairs Board. He was appointed to the Governors Staff as Aide de Camp, Lieutenant Colonel. He also served locally on the Regional Development Authority and Cannonball House Board. He was a past member of the Macon Exchange Club and was general manager of the Georgia State Fair for several years. He was an instructor at the Georgia Public Safety Training Center in Forsyth, teaching courses for both GEMA and FEMA.

Harold was a long-time member of Ingleside Baptist Church in Macon and was a member of the Brotherhood Sunday School class, at one point teaching that class for several years. He served on the Greeting Team for many years and also enjoyed attending events at the church with the Inglelites Senior group. In recent years, he also enjoyed joining his wife and daughter at the recreational gym at Ingleside, where he regularly walked 2 miles a day on the track then did weight training to keep up his strength.

He enjoyed playing golf, hunting and fishing, was an avid reader and as a staunch Republican, he was particularly interested in politics and was a member of the Monroe County Republican Party. He loved watching sports on tv, especially the Georgia Bulldogs and Atlanta Braves.

He is survived by his beloved wife of nearly 62 years, Betty Jones Carlisle; daughter, Julie (Keith) Busbee of Macon; sisters, Edna Dixon of Macon and Bettye Emerick of Beaufort, SC; and sister-in-law, Cindy Carlisle of Bolingbroke. Besides his parents, he was predeceased by brothers, Fred and Alex O. Carlisle, Jr. He also leaves behind several nieces and nephews, friends, neighbors and his beloved cat, Sunshine.

A Celebration of Life will be held on Wednesday, April 11 at 2 p.m. in the Chapel at Ingleside Baptist Church with Dr. Mark Hudgins officiating. Burial with Military Honors followed at Riverside Cemetery, North Gate. The family will greet friends on Tuesday, April 10 from 5 to 7 p.m. at Snow’s Memorial Chapel, Cherry Street. In lieu of flowers, the family requests for donations to be made to the Shriners Hospital, Ingleside Baptist Church or to the donor’s favorite charity. Visit www.snowsmemorialchapel.com to express condolences. Snow’s Memorial Chapel, Cherry Street, has charge of arrangements.

Marshall Kennemer, Executive Director of the NGAGA, writes “He was a dear friend and a former President of NGAGA.  He will be greatly missed.”  Contributions have been received from the National Guard Association of Georgia, the Kennemer Family and the Georgia Guard Insurance Trust.