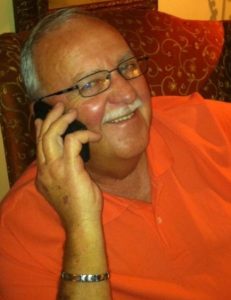 Our condolences to the friends and family of CW4 Dale Frost as well as our appreciation for designating the Georgia National Guard Foundation for donations in his Memory.

A reprint of his obituary from Townsend Brothers Funeral Home follows:

Services for Mr. Frost will be held Thursday, February 7, 2019 at Marie Baptist Church beginning at 2:00 PM. Interment will follow immediately after the service in Marie Baptist Church Cemetery. Rev. Bobby Hutto will officiate. The family will receive friends Wednesday night from 6:00 PM until 8:00 PM at Townsend Brothers Funeral Home.

Mr. Frost was a member of Marie Baptist Church. Dale proudly served in the Georgia National Guard spanning a career of 44 years. His duties included the 48th Brigade, 78th Troop Command, and Joint Force Headquarters Georgia, serving in the Logistics Division.   He achieved the level of Chief Warrant Officer 4 and was the oldest Chief Warrant Officer at the time of his retirement.  He was a friend and mentor to many Guard members. Mr. Frost was also an active member of the Dublin Civitan Club.

Dale had a genuine smile, love of life, infectious sense of humor, and lived by the Golden Rule. He loved big his wife, children, grandchildren, family and friends.  He was their gentle rock. This was expressed by an outpouring of love and affection by family and friends in his final days.

Mr. Frost was preceded in death by his parents; Hillery Frost and Ellen Graham Black Frost. He was also preceded by his siblings; Rev. James Frost, Bennie Frost and Lily Warnock.

In lieu of flowers donations can be sent to the Dublin Civitan Club scholarship fund in memory of Dale Frost; P.O. Box 635 Dublin, GA 31040 or to the Georgia National Guard Family Support Foundation, Bldg 447, 1000 Halsey Ave, Marietta, GA 30062 or online at georgiaguardfamily.org.